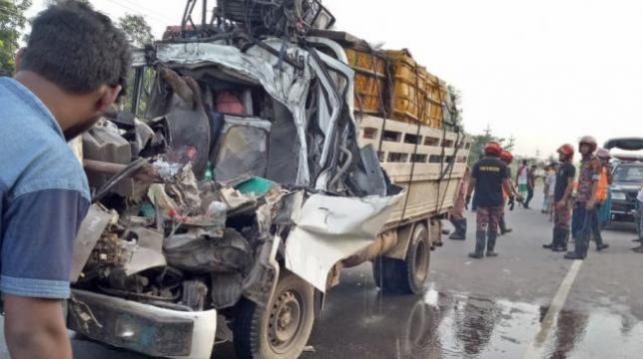 Paban Majumder is disabled. He met with a road accident and underwent surgery on 30 June at the capital city’s National Institute of Traumatology and Orthopaedic Rehabilitation (commonly known as ‘pangu hospital’), where his right leg was removed from above the knee.

Paban’s younger brother Madhab Majumder is looking after him. Madhab told Prothom Alo that around 10 in the morning of 9 June, Paban had been going to the market by motorbike in Hatia, Noakhali. He was hit by an ‘easy bike’ and was seriously injured. His right leg was broken. He was rushed to the Hatia upazila hospital and then later brought to a private hospital in Dhaka. He was finally brought to the government orthopaedic hospital.

Madhab said he himself had been badly injured when he fell off a coconut tree a few years ago. His left arm was broken. They spent a lot on treatment but his arm is still crooked. He said even his two other brothers had met with accidents. One brother lost an eye in while operating a machine in a factory in Dhamrai in 2000. Another brother committed suicide in 2007.This file photo taken on 11 October 2016 shows the Samsung store in Paris. Samsung Electronics France was charged in April 2019 with `deceptive marketing practices`. Photo: AFP

This family from south Hatia seems to reflect the state of accidents in Bangladesh. According to the last national survey on accidents brought out in 2016, it was revealed that 12 persons died in accidents and injuries per hour in Bangladesh. Every hour 2287 persons were injured. And among those seriously injured, every hour 28 were rendered disabled.

The report, ‘Bangladesh Health and Accident Survey 2016’, was prepared by the health ministry’s non-infectious disease control programme and the non-government Centre for Injury Prevention and Research, Bangladesh (CIPRB). A summary of the report was published, but not the entire report. Prothom Alo recently managed to get a copy of the full report.

Head of the CIPRB data management unit Md Abu Taleb, speaking to Prothom Alo, said, “Accidents, injuries or wounds are a serious public health problem. These have a deep impact on a family, the society and the state. The public only comes to know of a very small percentage of the accidents including road accidents, suicide and drowning. The actually picture is much worse and alarming.”

The World Health Organisation lists 13 categories of accidents and injuries. These are suicide, road accidents, falling down, being cut with sharp implements, being injured by a falling object, bitten by an animal or insect, violence, drowning, injury from a machine or equipment, electric shock, accidental suffocation and accidental intake of poison. The survey collected information on all these issues.

In the survey, 299,216 persons of 70,000 families in towns and villages of 16 districts of the country were interviewed. The survey covered the period from March to June 2016.

They survey stated that every year over 108,000 died of various accidents. Of these, 45,000 were children under 18 years of age. The main causes of accidental death among all age groups were suicide, road accidents, drowning and falling. Suicide was more common among women.

Meanwhile, over 20 million people are injured in accidents every year, of which 242,000 result in permanent disability.

According to the survey, around 109,000 people die of various accidents and injuries every year in the country. That means, 298 die every day or, 12 every hour. The elderly mostly die by falling down.

The survey report says that every year over 45,000 children under 18 years of age die in the country, that means, 125 in a day. And 37 per cent of this age group die of drowning. Other main causes of death in this group are suicide, road accidents and electrification.

Among adults dying in accidents, the main causes are suicide, road accidents and falling down. Every day 170 persons die of these three reasons.

A similar survey was run in 2003. A comparison of the two surveys shows that in the case of under-18’s, accidental deaths have increased other than in the case of drowning and animal bites. In 2003, every day there were 83 deaths. This is now 125. Deaths due to suicide, road accidents, electricity and falling, have increased.

Md Abu Taleb of CIPRB collected and analysed information in 2005 on accidents and injuries. He told Prothom Alo, “ Every day, every hour, somewhere in the country someone is in an accident. Sometimes it is because of one’s own fault, sometimes due to others’. Only a few of these incidents actually come to light.”

The survey took into consideration the accidents or injuries for which a person had to take medical treatment or had to abstain from attending school or work. That reveals that over 20 million persons are injured in a year, that is, 2287 persons are injured on the roads, outdoors, at home and at the work place every hour.

The most people are injured by falling. They fall from trees and high buildings, slip and fall on the streets, from buses, trains and rickshaws. They have to be treated for their injuries and their everyday life is disrupted. Every day over 16,000 people are injured in this manner.

While a huge number of people receive injuries, 91.9 per cent of these accidents are of medium degree where they are treated for their injuries and released or miss just one day from school or work. Serious accidents constitute 5.4 per cent of the mishaps where the victims stay for 10 or less days at hospital, but do not require surgery. And 1.4 per cent of the people are seriously injured in accidents and are rendered permanently disabled.

Every year 241,000 people become disabled due to accidents or injuries. That means 661 are disabled per day.

The most injuries are occurred by falling from heights. For about four decades now, the Centre for the Rehabilitation of the Paralysed (CRP) has been providing treatment and rehabilitation services for the paralysed. CRP executive director Md Shafiqul Islam told Prothom Alo, “Most of the patients who come here were paralysed after receiving serious injuries of the spine or back. According to our records, 40 per cent of the patients are injured when falling from heights. These include high trees, buildings, bridges and so on. Many patients come in the summer months when they fall from mango, lychee and jackfruit trees.”

Consequences and the way ahead

While presenting a research study on 26 May at the government’s planning division, Md Abu Taleb said, “Accidents have a deep impact on the family, close relatives and the society. Most parents speak of their children’s studies being hampered because of accidents.” Speaking to Prothom Alo, he said, when the only earning member of a family dies in an accident, the family become helpless. The children’s studies come to a halt. They may have dreamt of becoming a doctor, engineer, joining the police or anything, but they simply end up as child workers.

The research findings are very similar with that of the survey conducted by the health ministry’s non-infectious disease control programme. This study on the impact and consequences of accidents was funded by the social science research council of the government’s planning division. Deputy secretary of the planning division Uttam Kumar Das told Prothom Alo, “I had no idea that the problems caused by accidents were so big, so serious. We will send the results of this study to various ministries. The data will also be used in drawing up national policies.”

The survey report had several recommendations. It was said that accidents would have to be included on the priority list of the health sector and a national accident strategic paper would have to be prepared and implemented. Also, experiences of any positive initiatives to prevent accidents should also be shared.

CIPRB and icddr,b have jointly been running a project called Anchal since 2006, aimed at preventing drowning in water. The project is being implemented in 10 upazilas of 7 districts. Executive director of CIPRB Fazlul Huq told Prothom Alo, “Child deaths due to drowning have fallen by 50 per cent in our work area. All accidents can be reduced if such effective initiatives are taken up.” 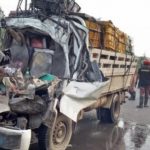