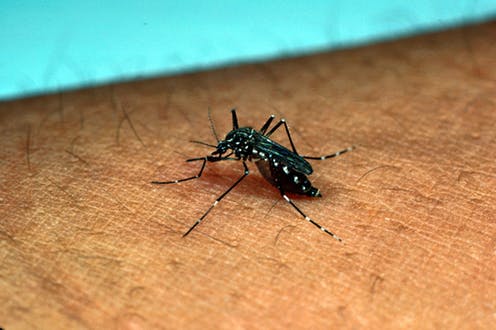 Once infected, humans become the main carriers and multipliers of the virus, serving as a source of the virus for uninfected mosquitoes. The virus circulates in the blood of an infected person for 2-7 days, at approximately the same time that the person develops a fever. Patients who are already infected with the dengue virus can transmit the infection via Aedes mosquitoes after the first symptoms appear (during 4-5 days; maximum 12).

In humans recovery from infection by one dengue virus provides lifelong immunity against that particular virus serotype. However, this immunity confers only partial and transient protection against subsequent infection by the other three serotypes of the virus. Evidence points to the fact that sequential infection increases the risk of developing severe dengue. The time interval between infections and the particular viral sequence of infections may also be of importance.

A person infected by the dengue virus develops severe flu-like symptoms. The disease, also called ‘break-bone’ fever affects infants, children and adults alike and could be fatal. The clinical features of dengue fever vary according to the age of the patient.

Individuals should suspect dengue when a high fever (40°C/ 104°F) is accompanied by two of the following symptoms:

Symptoms usually last for 2-7 days, after an incubation period of 4-10 days after the bite from an infected mosquito.

Severe dengue is a potentially deadly complication due to plasma leaking, fluid accumulation, respiratory distress, severe bleeding, or organ impairment. The warning signs to look out for occur 3-7 days after the first symptoms in conjunction with a decrease in temperature (below 38°C/ 100°F) include:

The next 24-48 hours of the critical stage can be lethal; proper medical care is needed to avoid complications and risk of death.

There is no specific treatment for dengue fever.

Patients should seek medical advice, rest and drink plenty of fluids. Paracetamol can be taken to bring down fever and reduce joint pains. However, aspirin or ibuprofen should not be taken since they can increase the risk of bleeding.

For severe dengue, medical care by physicians and nurses experienced with the effects and progression of the disease can frequently save lives. Maintenance of the patient’s circulating fluid volume is the central feature of such care.

The only current method of controlling or preventing dengue virus transmission is to effectively combat the vector mosquitoes. For more information, please see “Control strategies”.

Vector control is implemented using Integrated Vector Management (IVM) approach, which is a rational decision-making process for the optimal use of resources for vector control.

IVM requires a management approach that improves the efficacy, cost-effectiveness, ecological soundness and sustainability of vector control interventions given the available tools and resources.

Proper solid waste disposal and improved water storage practices, including covering containers to prevent access by egg-laying female mosquitoes are among methods that are encouraged through community-based programmes.